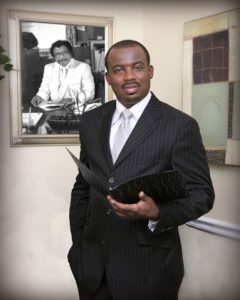 From a young child Quinton Douglas’s life has been mesmerized by the death care industry. At an early age, he begin attending funerals on the Southside of Jacksonville, Fl. While attending various funerals on the Southside of Jacksonville, Quinton caught the eye of a sharp “Undertaker” that dressed in all white every day. While amazed at the way the “Undertaker” carried himself and the level of respect he had in his community, Quinton desired to mirror the image of the “Undertaker” later known to him as the Late Walter L. Dorman.

Quinton would often watch as Mr. Dorman would prepare himself to conduct funerals on Saturdays while eagerly wishing that he could attend each one of them. As Quinton grew into his teenage years he began seeking employment at local funeral homes in Jacksonville, At the young age of 15 Quinton met the Rev. James A. Graham (James Graham Mortuary). After expressing his compassion to Mr. Graham of wanting to become a mortician, Mr. Graham gave him his big break in the industry by employing him as the “car washer”. The young teenage Quinton filled with excitement took the opportunity as a stepping stone to launching his career in funeral service.

While working at James Graham Mortuary throughout his high school years, Quinton worked under the tutelage of Mr. Roderick C. Sampson LFD as the young apprentice. After graduating from William M. Raines High School in 1997, Quinton enrolled into Gupton-Jones College of Funeral Service in Decatur, Ga. While attending Gupton-Jones Quinton came in contact with the Murray Brother’s Funeral Home in Atlanta, Ga.

While attending mortuary science school he became employed by Murray Brothers. Learning different trends of funeral service put him a few steps ahead of other young morticians.

After graduating from Gupton-Jones in February 2000, Quinton returned to his home town having successfully passing the National Board Exam and obtaining an A, S. Degree in Mortuary Science to begin his internship at James Graham Mortuary. After serving his internship he successfully passed the State Board Exam in Florida only to have accomplished a milestone in the industry as becoming one of the youngest Licensed Funeral Directors and Embalmer in the State of Florida.

Quinton continued employment at James Graham Mortuary as a Licensed Funeral Director and Embalmer until wanting to eagerly become a full-time embalmer for various funeral homes. After Quinton left his full-time position at James Graham Mortuary, he returned to the first “undertaker” that he had ever watched (Walter Dorman Funeral Home). After returning Quinton was hired as the embalmer and part-time funeral director at Walter Dorman Funeral Home. While employed at Walter Dorman Funeral Home the young undertaker began to master his craft. As his quality of work and work ethic begin to excel, he received the opportunity to seek more employment from various funeral homes.

One day while talking with one of his friends in the funeral service industry, Quinton received knowledge of an existing funeral home in Jacksonville that was interested in closing. After receiving the knowledge Quinton was introduced to the previous owner of the existing funeral home. Several thoughts begin to run through the young undertaker’s mind. The young undertaker thought his BIG DREAM had become a reality. The young undertaker who had a dream from a young boy had finally received the opportunity in 2011 to become the owner and operator of his own funeral establishment later to become the Q. L. Douglas Funeral Home.

After accepting the opportunity, Quinton has been an asset to the Riverside Community of Jacksonville, Fl. While gaining the respect of his collogues in the industry, Quinton along with his staff continues to provide the highest level of service to all